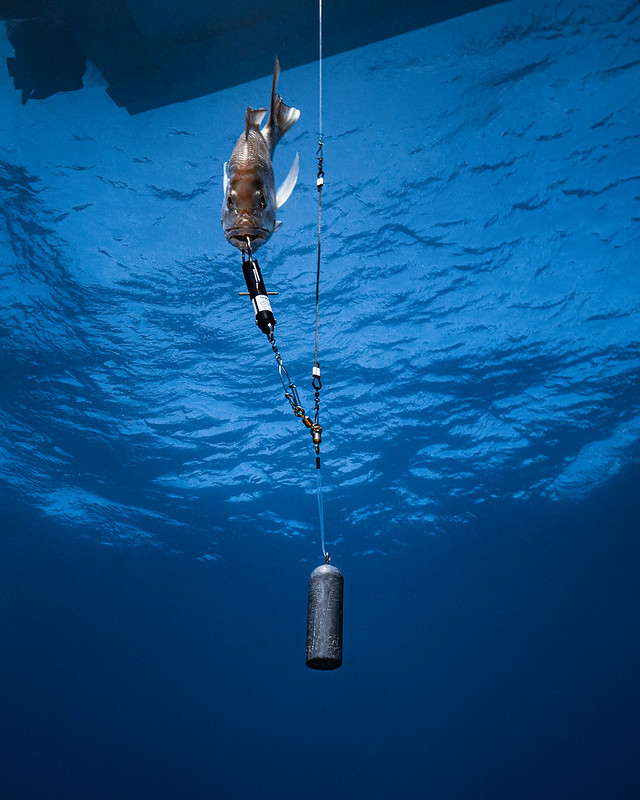 We all dream about going out there and catching a big grouper or snapper and bringing it home to cook for the family. But what happens when you head to your favorite spot in 150 feet of water, drop down a big live pinfish or jig, and catch your dream fish only to realize the season is closed and you can’t keep it?

First, you should take heart in knowing that Florida’s reef fisheries are highly regulated to keep the fishery healthy. Whether it is season closures, size restrictions, bag limits, or other management measures, every angler will be faced with releasing fish, no matter how targeted your efforts are. These management strategies are in place to ensure fish populations are sustained and accessible to anglers for years to come.

An important piece of this equation is doing everything we can to ensure the fish we release survive to grow and reproduce.

Federally managed species have an estimated discard mortality rate that is the percentage of released fish that are assumed to die. This means that fish we unsuccessfully release are counted against what we are allowed to harvest for the year. For reef fish caught in deep water, release mortality is particularly troublesome, as a high percentage of fish do not survive release. For example, it is estimated that 1 in 4 red snapper do not survive release in the South Atlantic. In the Gulf of Mexico, at least 10 million reef fish are released annually, and over one million of those will die.

THE TROUBLE WITH BAROTRAUMA
Every offshore angler has experienced it before: you catch a nice snapper or grouper out of season and toss it back only to see it float away on the surface. As avid anglers, it’s tough to watch, and we may turn our heads attempting to ignore it, but deep down it hurts. Fish caught in depths of about 50 feet or deeper often experience barotrauma, which is a pressure related injury that fish experience when being reeled up from the surface. As fish are pulled from an area of high pressure (the sea floor) to an area of low pressure (the surface), gases expand in their body displacing organs and leaving them bloated and unable to return to depth on their own. This problem worsens the deeper you fish as every 10 meters of depth is equivalent to an atmosphere of pressure. A fish trying to swim down while suffering barotrauma is similar to humans trying to swim down with life vests on… a struggle and often impossible. This is why discard mortality rates can be high for deepwater species.

WHAT YOU CAN DO
What can we do as anglers to help reduce discards, mortality and bring more fish home in the future? Let’s start with the basics. First of all, reducing discards altogether is one effective strategy to reducing catch and release mortality. If you have to weed through 15 undersized red snapper for every one keeper you catch, you are fishing the wrong spot. Move spots if you are catching too many small fish, or the wrong species, and use bigger hooks and baits to target the larger fish that you are more likely to bring home.

When it comes to releasing reef fish, that means learning and using best practices including the use of venting tools and descending devices to help return fish to depth. Considering you have to take additional steps to release reef fish suffering from barotrauma by venting or descending, working quickly to reduce handling time and air exposure is crucial to these practices working effectively. Now that these tools are also required to be on board vessels fishing in federal waters for snapper and grouper, it is even more important to learn how to use them properly and contribute to the future of our fisheries.

For many years anglers have primarily helped fish survive the effects of barotrauma through venting. Venting involves using a hollow hypodermic needle or tool to release the excess gas in the body cavity of the fish. Although effective when done properly, venting requires knowledge of the anatomy of a fish, precision use of the tool, and can cause further harm if not performed correctly.

More recently, the use of descending devices has taken off as one the most effective and easiest methods to mitigate barotrauma. Descending devices are weighted devices that carry fish back down and release the fish at depth, allowing them to naturally re- compress upon descent. Research has shown descending can be extremely effective at increasing long-term survival of fish suffering from barotrauma. Despite their existence for years and widespread acceptance on the Pacific coast, the phrase “descending device” is still relatively foreign to many anglers in the Southeast.

There are several reasons descending devices are becoming more popular:They do not require knowledge of the anatomy of the fish, they are less invasive as you don’t have to pierce the body cavity of the fish, and there are several commercially available options (or you can make them yourself at home).

Descending devices are typically grouped into three categories which includes lip grip devices, inverted hooks, and fish elevators (or weighted crates/baskets). All of them work similarly where a device is used in combination with a weight to lower fish back down to depth, and during the process, the fish recompress naturally. As recreational anglers, it is our job to recreate responsibly. This means giving every fish we release its best chance of surviving.

As more people are fishing than ever before, holding each other accountable to use best release practices and reduce waste in our fisheries is one of the most important strategies to sustain our fisheries for generations to come.

Deepwater Release Device Requirements
ON JULY 15, 2020, REGULATORY AMENDMENT 29 to the Fishery Management Plan for the Snapper-Grouper Fishery of the South Atlantic final ruling went into effect requiring anglers fishing for or possessing snapper-grouper species to have a descending device on board and readily available for use. On January 13, 2022, the DESCEND Act went into effect in the Gulf of Mexico requiring anglers fishing for reef fish to possess either a venting tool or a descending device rigged and ready to use when fishing for reef fish in federal waters. There are also hook requirements such as using non-stainless steel, non-offset circle hooks when fishing in certain latitudes.

Return ’Em Right is a new program that is the leading voice for tackling catch-and-release mortality due to barotrauma in the Gulf of Mexico. Its mission is to improve reef fish survival by equipping anglers with the knowledge and gear to confidently and successfully release reef fish. Offshore anglers can visit returnemright.org to learn about barotrauma and participate in a short 15-minute training on best release practices, including venting and descending. Upon completion, eligible anglers will receive a package of release gear for free which includes a SeaQualizer pre-rigged to a 3-pound weight and an inverted hook descending device (~$100 value). Although gear is only available for anglers that fish in the Gulf of Mexico, the lessons and education is relevant everywhere and all reef anglers should participate to learn and use best release practices.