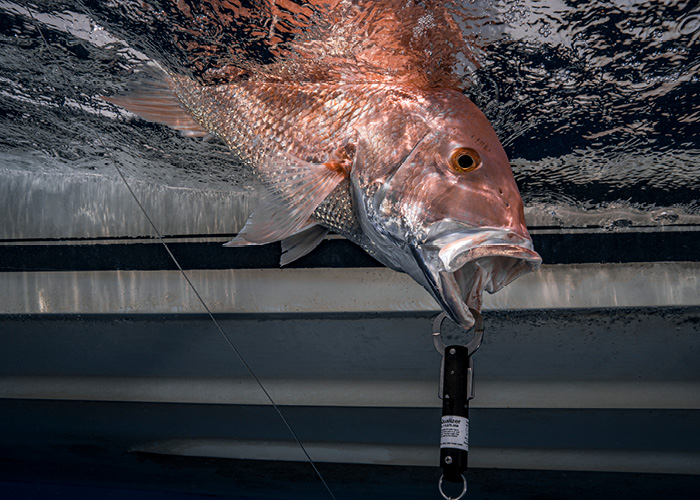 By DAVID RAINER, Alabama Department of Conservation and Natural Resources

With the Gulf Coast in the peak of fishing season for the abundant reef fish in Alabama’s vast artificial reef zone, the Return ’Em Right program is designed to educate anglers on how to ensure any fish caught and released have the best chance to survive and return to the reef.

Charlie Robertson, Fisheries Restoration Coordinator with the Gulf States Marine Fisheries Commission, said fish that don’t survive after being released, known as dead discards, have an impact on the reef fish species and anglers alike.

“Obviously reef fish are a big staple in the Gulf,” Robertson said. “This program was funded through a project and came about through the Deepwater Horizon Open Ocean Trustee Implementation Group. It identified reef fish as some of the species impacted by the oil spill.”

The project is designed to address depredation and release mortality concerns as well as monitor the effectiveness of descending devices and venting tools in improved fish survival. The goal is to increase the number of fish that return to depth safely, which leads to improved angling experiences.

The U.S. Congress passed the Descend Act that requires vessels fishing for reef fish to have a descending device or venting tool ready for use.

“The timing of the Return ’Em Right program coincides nicely with the federal requirement to have either a descending device rigged and ready for use or a venting tool onboard a vessel fishing for reef fish,” said Scott Bannon, Director of the Alabama Department of Conservation and Natural Resources’ Marine Resources Division. “I have been pleased with the participation from Alabama anglers in the online training; this shows they are actively engaged in ensuring we do what is best for this fishery. Every fish that survives being returned helps grow the fishery and provide future fishing opportunities.”

When NOAA Fisheries, with input from the Gulf of Mexico Fisheries Management Council, evaluates a fishery stock, like red snapper, the number of dead discards is included in the assessment and can affect the annual quotas. Reef fish can suffer from barotrauma, which happens when the fish is reeled in from the reef to the surface. The change in barometric pressure causes the fish’s swim bladder and stomach to expand, hindering a return to depth when released.

“We understand that a lot of fish we discard – whether regulatory, out of season or undersized – those fish may not have as good a chance at survival,” Robertson said. “We know that barotrauma is one of the things we can mitigate. We can’t control predators. But we can control how we deal with barotrauma. We can control how long we keep a fish out of the water.

“Barotrauma is not the only thing we want to look at. We want to look at the bigger picture and all the release practices, which includes the handling of the fish and how quickly we get it back in the water.”

Venting tools are designed to release the pressure in the swim bladder and stomach, while descending devices are used to return a fish to a certain depth before it is released to return to the reef.

“When you toss a fish over and it swims down 5 feet, we don’t know if that fish necessarily made it back to the reef,” Robertson said. “It’s got 100 feet left to go. Using the descending devices, it allows the fish to get to depth quicker without having to use its own energy. It releases the fish close to the bottom or within the reef complex or a school of fish to give it some natural protection.”

Research is starting to show that fish released closer to the bottom using descending devices have a better chance of surviving.

“With the growing number of recreational anglers – which is a good thing for people to get out on the water and enjoy the resources, it makes it all the more important to keep the mindset that we need to increase the survival of the fish we’re catching, Robertson said.

Robertson said numerous species are considered reef fish, but Return ’Em Right is focusing on key species that were identified in workshops in 2019.

“Scientists, anglers and resource managers developed a matrix with higher important species for mitigating discard survival,” he said. “The species that are priorities in our project are red snapper, gag and red grouper, gray triggerfish and greater amberjack. That’s not to say they’re more important than some of the other reef fish that we’re catching on a regular basis. In different parts of the Gulf, you have different species you encounter.” Nick Haddad shows off the descending device being sent to anglers who complete the online educational modules at returnemright.org. Photo courtesy of Return ‘Em Right.

Robertson said Florida Sea Grant is managing the outreach and education for the program, which includes free tools to anglers who go to returnemright.org and complete an education module. After completion, which takes about 15 minutes, anglers become eligible to receive a package of descending gear valued at $100.

Included in the gear is a SeaQualizer device that is used to release fish at 50-, 100- and 150-foot depths. An inverted hook device is also included that allows the fish to be released manually.

“The package includes a rig that includes a swivel and three-pound weight,” Robertson said. “All the angler has to do is clip it onto the SeaQualizer device.”

So far, demand for the descending device package has far outstripped the supply. More than 7,000 anglers have completed the module. Return ’Em Right has shipped more than 4,000 devices and is processing about 500 per week.

“One of the big uplifts for this program is we’re educating anglers in the Gulf about best practices for release,” Robertson said. “It includes how and when to use different tools to increase discard survival.”

Robertson said Nick Haddad with Florida Sea Grant has been instrumental in the education and outreach aspects of the project.

“The idea is to give back to anglers after the oil spill with free gear and support the fishery for years to come by properly releasing fish,” Haddad said. “This is not only important today but also 10 years down the line. These fish are spawning and contributing to the future of the stock.

“We’ve received tons of voluntary feedback that the gear works great and that the training should be mandatory for all offshore anglers. It was an outpouring of support we didn’t even ask for.”

“We’re going to be working some of the tournaments as well,” he said. “We’ll be at the Alabama Deep Sea Fishing Rodeo (July 14-17 at Dauphin Island), and we’ll be at the ICAST (International Convention of Allied Sportfishing Trades) show in Orlando. We’re going to tournaments and events around the Gulf to really let anglers know that it’s in their best interest to increase reef fish release survival because discard mortality is counted in the quota. The more you incidentally kill, the less you get to harvest. The whole point of this is to contribute to a healthy fishery for years to come and make sure we can access it. We want to fish as many days as possible, and release mortality is something that is partially in our control.

“We’ve had requests from anglers who want more education on venting techniques with more information and videos. We plan to give them what they want from the education perspectives. I encourage everyone to be a part of this program, whether you fish every day offshore, once a year offshore or just are interested in fishing offshore.”

Robertson described the feedback from anglers who have completed the module as “phenomenal.”

“They’re telling us that the SeaQualizer is even easier to use than a venting tool,” Robertson said. “You get the hook out of the fish’s mouth and clip on the descending device, which acts almost like a BogaGrip. Then you release the line on your reel and send the fish down to the desired depth. It’s really easy.” A venting tool allows the air to be purged from a fish’s swim bladder before it is released. Photo courtesy of Return ‘Em Right.