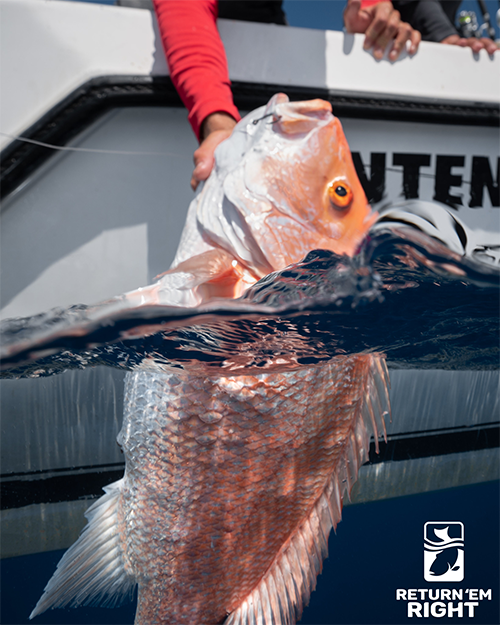 As anglers and conservationists we don’t just live for the catch, but the opportunity to pass along the fishing tradition to the next generation. Catch and keep fishing is a fantastic way to put food on the table. When we do practice catch and release, however, the future of fishing literally rests in our hands. Releasing a fish alive back into a lake, river, or inshore saltwater can consist of keeping the fish wet and minimizing its time out of the water. Releasing a fish alive offshore, however, comes with its own unique challenge.

Barotrauma is a condition that happens to fish when they are reeled in from extreme depths. As the fish rises quickly up the water column and pressure changes rapidly, internal gasses in the fish’s body make their organs, eyes and the body swell and become bloated.  The organ most commonly affected by this condition is the fish’s swim bladder, which controls the level of buoyancy in a fish depending on where they are in the water column. If a fish is not released properly, their inflated swim bladder will keep them on the surface where they will likely die, or be eaten.

We at Fishbrain know the importance of conservation and are beyond excited for our new opportunity to work closely with the conservation group, Return ‘Em Right. The organization is dedicated to the preservation and conservation of Gulf Coast fisheries. One of their core tenets is to equip anglers with the knowledge and tools that allow for more deep sea species to survive barotrauma when released.

According to Return em Right, approximately one million fish die each year in the Gulf due to barotrauma. The group’s newest initiative aims to diminish these numbers through a program which equips anglers with tools that safely release fish back to deep waters.

The short online review covers dehooking, releasing fish and how to operate release gear, which attach to a fish suffering from barotrauma to help safely and slowly return it back to the depth it was caught.

Anglers who take the seminar and learn to use the gear, called descending devices, will receive a package of release gear to use out on the water.

“Return ‘Em Right welcomes all anglers to participate in the program and we are excited to be a resource to a community committed to preserving the future of the sport,” said Nick Haddad, Return ‘Em Right Communications Manager.

You can learn more about Return Em Right by checking out their page on the Fishbrain App, or by visiting their webpage.

Return ‘Em Right is a program that aims to reduce catch and release mortality from fish suffering from barotrauma in the Gulf of Mexico. The program is led by Florida Sea Grant, University of Florida, Gulf States Marine Fisheries Commission, NOAA and a coalition of anglers, industry groups, state agencies, universities, government and non-government organizations committed to maintaining healthy fish stocks and fishing access in the Gulf of Mexico. The project was selected by the Deepwater Horizon Open Ocean Trustee’s as part of a 2019 Restoration Plan.

previous
Prepping for Summer Snapper? Gear Up with Free Release Tools from Return ‘Em Right!
next
The Outdoor Show with Info from Nick Haddad